Law of Sedition, Aseem Trivedi and The Media 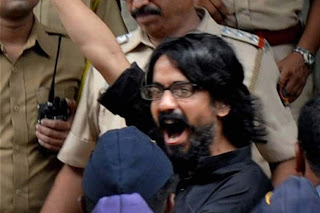 Before I say anything else, I must first clarify that neither I claim that Aseem Trivedi's is guilty nor will I vouch for his innocence. A Court will decide that.

By now everyone knows what the Aseem Trivedi cartoon controversy is all about. I for one have not seen the cartoons. I'm not going to delve into the ethics debate that seems to be doing its rounds among cartoonist and others alike. What I will simply convey is my understanding of the law under which Aseem has been arraigned by the Police. I'll also tell you my opinion about the serious mistake that the media might be committing in this whole controversy.

Aseem Trivedi, for drawing cartoons that have allegedly desecrated our democratic institutions, has been charged under Section 124 A of the Indian Penal Code. This is undubitably a very serious charge, one of sedition against the Government established by the law of the land. I'll lay down the law as it stands so that you can form  an objective opinion about the issue.

Explanation 1.—The expression “disaffection” includes disloyalty and all feelings of enmity.

Explanation 2.—Comments expressing disapprobation of the measures of the Government with a view to obtain their alteration by lawful means, without exciting or attempting to excite hatred, contempt or disaffection, do not constitute an offence under this section.

Explanation 3.—Comments expressing disapprobation of the administrative or other action of the Government without exciting or attempting to excite hatred, contempt or disaffection, do not constitute an offence under this section.

I do not want to discuss the merits of Aseem's case since it is a matter before the Court. I do not want to commit the same mistake as, for instance, Arnab Goswami of Times Now channel seems to be committing. He has bludgeoned Aseem's work as derogatory, anti national and anti democratic on prime time television, knowing fully well that it is a serious offence to prejudice mankind against a person who is facing trial in the Court of law. It is a dire need of the hour that either the Govt. or the Supreme Court must issue appropriate guidelines for media regulation in such matters. I for one would personally prefer that the Hon'ble Apex Court of our country does this task since in doing so it'll have an unbiased and independent approach and it'll never take away media's right to effective reporting and fair criticism. Therefore it's high time someone drags the channels to the Court. In the name of self regulation media is totally unregulated. It was only a few days ago, when the Supreme Court had come down heavily on the media for its mindless and insensitive Live broadcasting of the 26/11 Mumbai attacks which resulted in serious setback to security forces fighting those terrorists on the ground..

I'm not for moment saying that Aseem is innocent or that he is guilty. It's not my business to say so, particularly not on prime time television. As an anchor of a news show / debate, one is expected to keep his own opinions to himself and allow a balanced submission of contentions by the participants of debates. It was horrible to see the way Arnab was going about the whole affair. He for instance said that the cartoons are so scandalous that he will refrain from showing that on TV. Then he went on and on against the cartoonist and his alleged lack of respect for his mother land. My point is that let us not have such debates where the pivotal issue is sub judice before Courts. Because once you have the debate you cannot actually prevent prejudice from being propagated. But then a channel has got to do business, at any cost.

Now an obvious question may come from the other side -  What about freedom of media, free speech and Article 19 of the Constitution ? Well Article 19 of the Constitution while guaranteeing to every individual right to freedom of speech and expression, is also subject to 'reasonable restriction' . Now that reasonable restriction is based on well established principles of law. For example I cannot defame somebody by abusing my right to free speech. So the moment someone's speech and / or expression tends to violate a established principle of law, reasonable restriction is cast on it from that very moment and continues to be so till that speech or expression continues to tend to violate any law. Please remember that in no healthy democracy freedom is absolute. Every freedom has some limits.

I don't think I need to tell my dear readers that how seriously undemocratic and unconstitutional the act of causing prejudice against an undertrial person is.

For a detailed analysis of this issue  (Read More On Free Speech, Media Trial & Prejudice ).

Coming to another aspect of this case, I've seen a lot of people getting furious against the law under Section 124 A. Some call it barbaric, some call it anti - free speech and some label it archaic. Honestly I do not understand why they think so. Every country needs to frame a law to safeguard it's Government by attaching strong consequences against unjustified & mala fide attacks on it. In a country like India, there would always be disruptive elements who would go to any despicable extent to malign a Government. It is against such attempts that the law under Section 124 A exists. It is also a serious misunderstanding that Section 124 A takes away anyone's right to freedom of speech and expression, or as it is popularly touted, curtails fair criticism of Government functioning. If one reads Explanation 2 & 3 to Section 124A, you'll know that fair criticism of the Govt.'s actions to bring about meaningful change in them, without any malice towards is clearly exempted from the purview of this section. So why the chaos against Section 124 A ?

It is necessary to understand the two important terms used in this section viz. disaffection and disapprobation. These two terms as well as the import of Section 124 A have been lucidly explained by the then Chief Justice Sir Comer Petheram in the following words :-

"Disaffection means a feeling contrary to affection, in other words, dislike or hatred. Disapprobation means simply disapproval. It is quite possible to disapprove of a men's sentiments or action and yet to like him. The meaning of the two words is so distinct that I feel it hardly necessary to tell you that the contention of Mr. Jackson (the lawyer) cannot be sustained. If a person uses either spoken or written words calculated to create in the minds of the persons to whom they are addressed a disposition not to obey the lawful authority of the Government, or to subvert or resist that authority, if and when occasion should arise, and if he does so with the intention of creating such a disposition in his bearers or readers, he will be guilty of the offence of attempting to excite disaffection within the meaning of the section though no disturbance is brought about by his words or any feeling of disaffection, in fact, produced by them. It is sufficient for the purposes of the section that the words used are calculated to excite feelings of ill will against the Government and to hold it up to the hatred and contempt of the people, and that they were used with the intention to create such feeling."

It's under these established canons of legal principle that Aseem's case will now be tried.

When we vent our anger against the existence of sedition law by saying that it gives the Govt. in power  and the Police the excuse to muzzle free speech, we must understand that Police can arraign anyone in any case under any penal provision. It's ultimately the Court of law where the veracity of the Police / Prosecution case is tested. So let's hope justice prevails in Mr. Trivedi's case.

As far as section 124A is concerned, it is my personal opinion that the law should remain as it is. If this Section is not there, then disruptive elements will incite all kinds of verbal contempt against a Govt. with ulterior motives and get away under the plea of right to freedom of speech and expression. Section 124 A seeks to balance free speech by controlling and deterring hate speech and contemptuous slander against Government. Minus this provision, there will remain no strong legal deterrence against perpetual malicious hate spewing against the Govt. of the day. Though the section imposes restrictions on the fundamental freedom of speech and expression, the restrictions are in the interest of public order and are within the ambit of permissible legislative interference with that fundamental right.
_ Anupam Patra wrote this on 9/10/2012 09:21:00 pm