A Walk On The Shore 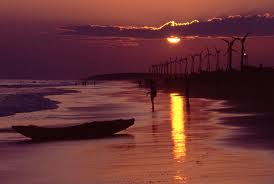 I decide to leave behind my fears, my worries, my affections, my prejudices and my hopes and expectations. I unload them all and surrender my self to emptiness. A void that, at the moment, has all the relevance that one could possible fathom. A void, that everyone evades, I embrace. I offer my deepest apology to it for having nurtured unfounded bias against it. For having abandoned it in the lure of glittering accompaniment, all of which now stand derelict.  It's kindness is immeasurable. For it warmly returns my embrace despite the history of betrayal.  We beckon a absent minded rickshaw puller. He is already past us. His good fortune makes him turn his head and notice us. We move like we will never arrive.

A half hour later, I settle his due and push an extra twenty into his fold. It's a barren business, a race lost even before it began. I might be the last customer to have summoned him for the day. He pours out his gratitude and even thanks his stars. He thrusts his weight on the creaking paddles to pull his non polluting three wheeler and rolls away like an exiled ally after man found better company in the aggressively scampering engine pulled  menaces. I turn around and face the sea. It's vast, full of water, of life, of opportunity, of promise and hazards. Though I sense nothing about it, I'm drawn to it like a poet is to plot. There's something about a somber shore that makes it pregnant with solemn musings, which rush into his head who steps on to the sands of it. I fail to think of happy things. I recall having concealed them at home. I tread ahead, struggling to find my feet, partially because of nonchalance and partially because of the frail sand. The strong breeze born in the breast of endless water rides to humanity on the kind waves. It get off the tides at the shore and offers itself generously to waiting faces. People relish its gentleness. But I witness a fickleness about it. At moments it is a sober healer and in the next it turns belligerent causing men and women to panic. It plays seductively behind my ears. I do not surrender. It's annoyed and roughs up my tousled hair, tousling them further. It sticks to its games. I walk on.

The face of the shore is lit up by a dozen laughing expressions and zestful shrieking and yelling. I see overweight frames clad in funny looking beach wear. I pause and muse. I wonder what's more hilarious, the beach wear or the frames. They are oblivious of my observation. They care the least. I steal away. I see unadulterated sons and daughters of the soil, going merrily around their brooding guardians. They offer the shore the respect that shores deserve. Unlike their mature companions, they know better than to dishonour these moments by busying themselves with troubles and worries. I learn from them as I move on.

I see a flock of gulls hovering over the confluence of water and land. They seem to lack the courage to travel beyond, into watery nothingness, where they will have no land to alight on, in case their wings fail them. They make a mess over our heads. All turn up to verify the source of all that squeaking and cawing. A group of tourists break into hearty laughter as one of the birds empties itself right on their mate's wavy strands of hair. He stands stunned. He isn't angry, only embarrassed. It's a good trait yet rare these days. I remember how people have turned inexplicably sensitive and intolerant. Men have lost their characteristic magnanimity and attributes which often distinguish them from lesser beings. Most can't stand a single gesture of dissent or tolerate even the slightest deviation from their expectations. Well it's all part of some grand scheme, I console myself to believe.

I'm fixated on the anguish of waves. If someone would have asked me then the cliche'd question about how does one know whether someone's love is true. I'd have quoted to him the commitment of the waves. I'd have told him " Love is a feeling akin to what the waves have for the shore. They know the "twain shall never meet and stay together, but they keep coming for it. Tirelessly, unconditionally, eternally. Destiny commands them to never hold the shore, yet they come again and again and again for nothing but to hold on to it." Must have been some irredeemable betrayal in some by gone era that the waves must have committed, I thought and shuddered.

My interest wanders off to a group of scantily clad fishermen with their symbolic jute hats on their heads. Such has been their relentless exposure to the sun of all seasons, that it is difficult to tell men from dark boats. They return from their expedition. A few of them shoot wail like verses. But they are happy. I know this because I see no one's head hung or heart laden.

To a bystander, to a tourist, being fisherman is the best way to live the seas. What he doesn't know is that the sea is but a battlefield for the poor fellow. Every morning he dons his best war hat and ventures into the deep of the blue, to its most fertile spots and he sails feigning frolic, yet his eyes belie him upon his return, particularly when he returns empty netted. I for one empathize with him because I remember returning home with no hope to share yet pretending a zeal for life. A fisherman frequents the much craved places in the infinite ocean yet has no eye to cherish its beauty, no heart to sense its ethereal significance and no mind to marvel at its profound mystique. His eyes vie for patches in water where schools of fleshy fishes swim, his heart beats anxiously each time he hurls his tattered net onto the skin of the sea, with his mind plotting and scheming for a profitable catch. Who has time for nature ? he thinks. Nature can happily remain a distant desire for tourists from concrete jungles, not for those who frequent it more than they run to their loo.


A loud wail disturbs my thought. I turn in its search. I spot it. A rebellious child is in no mood to give up his plan to ride the camel. The camel itself is unfazed by the commotion. May be it's used to such occurrences or may be it doesn't bother about anyone around.  Why should it ? It has nothing to be obliged for. If anyone should be, then it is us. We can't do without it. A child cries for it, couples wish to be frozen on it for eternity, its dealer depends on it for his morning bread. The pride on its gaunt face and the smirk perched on its gnawing lips are impossible to miss. The child's won over by some deception, a subtle art, easily and sometimes necessarily practiced on adamant kids. The dealer of the camel spits on the wet sand and grumbles in disgust upon having had his precious time wasted. The delight on the camel's face is resolute and the multi hued bells dangling across his neck begin to sing as he is guided over the spongy sand by his keeper.

I catch glimpse of a tired sun, done for the day, in this part of the world. Bracing itself for a quick dip in the distant water en route to the land where our western brothers and sisters await it. But there is some time left for that.  In the solemn velvety red scattered all round, I see tourists unpack their lenses and click away at the sun. I wonder if those pictures would be able to offer the same sensation as watching it in real.  I, for one, would rather walk here everyday to see the sun set, than hold the picture of it in my hands. Tired wings propel birds back to their aerial homes.

I come to the secluded part of the beach. I have lost the cacophony far behind. Except the gurgling and roaring tides nothing distract my thoughts. The beach is finally lonely. I humor my mistake. I see lovers. They are dispersed all over the place, like hued flora in the garden of intimacy. The serenity of their disposition is reassuring. They cuddle, they hold each other passionately. Some are engrossed in fervent kissing. The world can go to hell kind. Others remain content with holding hands. I even come across few who profess their adoration as they walk into the sunset. I see a lady. her fragile wrists laden with marital bangles thrice their size. 'Fresher', I whisper to myself,  in the path of commitment, sacrifice and tolerance. Did I forget love ? She seems to be feeling conscious about the attention she is inadvertently drawing by the amplified clinking and clanking of her bangles even at the slightest hand movement. But something keeps her unafraid and confident. She is with her man. Who is at peace on her lap, his eyes shut tranquilly, his chest rising and falling steadily, suggesting his soul's flight to another world where their union is independent of mortal sanctions. Suddenly he says something which I can't hear. I'm ashamed of my curiosity, for it seeks to violate their privacy. It's good that I didn't hear him. As soon as he's finished, his lady softly covers his mouth with her Henna adorned palms. He raises his hand and caresses her neck and moves upward with tantalizing pace. She can't prevent her giggles. She bends over his face and her breeze filled hair screens their intimacy. I'm glad it does.

I'll soon be there and she'll meet me with unmatched disdain in her tired eyes. If I don't say a word in protest, she'll walk up to me and run her hand over my temple and look very worried about my health, desperately seeking my reassurance. Tables would turn. She'll rush to fetch a glass of my favourite lemonade which she'd prepare in a jiffy and quietly tip toe out while I have my eyes closed in contemplation and come back only an hour later to ask if I wish to have anything special prepared for dinner. I'll ask her to forget all that and let her sit near me. I'll slip my hand on hers and we'll eventually tighten our grip. She'll be on my chest in no time. I'll feel her warm breath crashing on my cold chest. I'll be tempted to run my finger on her cheek. She'll tighten her embrace and doused flames will rekindle.

I snap out. I feel impulsive, brimmed with urgency. I need to get home.  I can see Suresh, my chauffeur. He's waving at me. The sincere fellow is right on time. I hop into the vehicle. It roars to life and we move in the direction of my home.

I ask Suresh 'Is Madam home ?'

He adds, 'She's gone to her father's. You'd forgotten your cellphone at home.You should call her.'

'Must be some silly family congregation', I think to myself

The sound of the grunting decade old car engine hurtfully fills my ears as I watch in the rear view glass, the faint rim of the sinking sun making its way into the water.