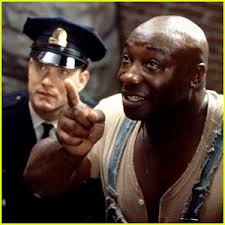 Remember the menacing looking yet gentle mannered death row inmate John Coffey, with magical healing powers, in "The Green Mile". It was played by Michael Clarke Duncan and it was the same role which earned him nomination for an Academy Award and Golden Globe. 'Big Mike' as most of his peers and loved ones adoringly call him, died yesterday at Cedars-Sinai Medical Center in Los Angeles after he suffered a myocardial infarction on July 13.

Michael acted in quite a few notable films, including "Armageddon," ''Planet of the Apes" and "Kung Fu Panda," It's amazing that he only turned to acting in his 30s, It's clear from the large pouring of prayers and remembrances for him that Michael gentle-giant persona made him much-loved during that relatively brief time.His presence was formidable, even intimidating: The former bodyguard had a muscular, 6-foot-4 frame, but it was topped by the brightest of glittering smiles. No matter the role, a warmth and a sweetness was always evident underneath.


Born in Chicago in 1957, Duncan was raised by a single mother whose resistance to his playing football led to his deciding he wanted to become an actor. But when his mother became ill, he dropped out of college, Alcorn State University, and worked as a ditch digger and bouncer to support her. By his mid-20s, he was in Los Angeles, where he looked for acting parts and became a bodyguard for Will Smith, Jamie Foxx and other stars. The murder of rapper Notorious B.I.G., for whom Duncan had been hired to protect before switching assignments, led him to quit his job and pursue acting full-time.