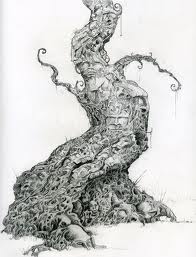 ‘I love you Sir’ she sighed.

‘What ? You do ? he queried with unconcealed sense of victory.

‘Come’on Zoya. You know I’m married. ‘ he tested her

‘I don’t care. I just..I just love you’ she reiterated, unfazed.

‘You’re so beautiful and smart. What can a middle aged loser give you. You can get any dashing man any day’ he replied, intending to corner her.

‘I want you’ she fumed

‘Ok tell me why?’ he queried with apparent sincerity.

She fell on his feet and raised her head like his devotee, demurely receiving his glare and said ‘What do you want to know Sir. That I have been fancying your admiration since the day you walked into our branch office as our new Manager?. That I’ve been, ever since, dreaming to be cosseted by you. That your eloquent introduction to your own self still reverberates in my ears ? That you’ve unparalleled intelligence, besides an incredible personality and looks that tell of a boyish allure about you? A combination which is dwindling faster than the ozone layer. That you’ve managed to make me want you by staying away from me when every other man under this roof has made elaborate attempts of winning my heart. If that was your grand plan to keep me interested, then my love, it has worked wonders. For my heart pines for your love. It has abandoned all indulgences that ensured its gaiety and embarked on a quest to forever become yours ’ she explained.

He was elated. All his senses reveled in a peculiar contentment of having won desirability.
He suppressed his expressions and wearing a grim smirk retorted ‘What about Arnav? The whole office knows that you guys are seeing each other. You can’t fool me there. He makes for a very suitable option anyway. He's handsome and has a promising career’

‘Arnav ? !! He’s an infant before you. A thousand Arnavs cannot equal the masculinity of your little finger's tip. I doubt whether even after taking seven births he’ll be able to stand face to face with your shadow’ she teased him with tantalizing grace.

He gulped down his pride and blurted out nervously ‘You..really want me to believe that. From what I hear, a dozen of our ladies are devoting crucial working hours into devising sure shot schemes of becoming his wife..err..girlfriend..whatever. And you, being the most pretty and sensible woman that I’ve ever known, wants to tread in the exact opposite direc….”

‘Oh Sir, did you just call me pretty? Oh, my!!!Thanks Sir. Lucky me.. Everyone calls me 'beautiful’, but the way you remark of me as 'pretty'... it's much more.." she interrupted him and blinked like an anxious bride.

‘Ok ok. Tell me truthfully. You and Arnav never had an affair ?’ he probed again

‘Sir what should I do to evoke trust in your suspicious heart. It harbors fears of a teenager. Tell me Sir, had I had anything to do with Arnav, wouldn't I have been in his arms instead.' she emphasized.

The picture of her in Arnav's arms brought a stark bitterness to the velvety ambience and he shut his eyes to prevent further imagining.

'Arnav may claim that he’s mad for me, but I’ve always told him that I belong to Sir and that only he holds claim to my body and soul’  she continued with a hint of impatience.

It was enough for him. He wished to confess about his hurting beneath his rugged veneer

'You know my wife always loathes me. She leaves no stones unturned in convincing me that I'm a man who has since long, lost all his charm and attractiveness, to be precise, within a couple of years of our marriage. That even a promiscuous lady who is offered with my company as her only option, will prefer to die single. That I'm pot bellied, more suited to do chores than flirt around. She has absolutely no fear that someone may find me attractive or may make indecent propositions to me. She's more confident of never losing me to any woman, than she is about the taste of her delicacies which she's been cooking for a decade. Even my friends think the same. And you want me to believe you ?' he sighed and sank on his thickly cushioned made to order revolving chair.

'Believe it Sir. You're everything that I've always wanted ..in fact you are the ideal man for every sensible woman out there. Witty, good looking, kind. Your eyes speak the agony of your heart, ages before your lips do. They draw me like a charmer draws his victim. I'm the victim Sir. I've chosen to be their victim.'I've been waiting for you since millenia. If it be your wish then let's walk out to the world and show them how wrong they are about your persona and popularity. Even to your wife so that the dumb woman talks to my Sir with some respect the next time around.' she suggested earnestly.

He delved in her sparkling blue eyes, mysterious as the deep blue seas themselves. They inspired faith in one moment and in the next they challenged it. For him, the biggest truth now remained that she had fallen down on her feet and begged him to take her as his beloved.  It’s time he called his old mates who, unlike him, would have lost their gloss and charm to time. He pictured them hiding their ageing forms behind the façade of expensive dressing and relentless makeovers. Coy to accompany their wives in public gaze.  And here he was, rendered the ultimate object of desire by the most desired woman herself, despite his marriage and all his listed inadequacies. It was time he reminded his detractors, that he may be old but magnetic nevertheless. It’s time he told them about his charisma.

He opened his eyes to the intimidating stare of his round faced, nagging wife, infuriated at the hint of another woman’s name on her husband’s lips. The pressure cooker’s loud whistle went off  in the nearby kitchen, announcing the prepared brunch. The radio in the living room had been long singing devotional songs. Countless chirps of busy birds broke the peace of morning. He lay still on his bed, evading his wife’s persistence to know about the lady whose name, she thought her husband was chanting in his dream. Aahh !!, the dream. He reminisced his dream. Its glimpses reminding him of his inescapable reality. The lady from his office was gone and he lay with his sagging belly and impending oldness on his cot as the 'Inverter' powered table fan hummed monotonously near his ears. He looked at the air conditioner. It hung dead stripped of electricity. Someone yelled 'Damn these early morning power cuts. They never let you finish your dreams.'

**   'Old' is a work of fiction.and any resemblance in it with any person, place or incident is purely coincidental.