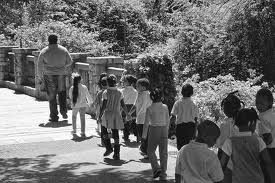 "He abused his teacher with vengeance. There were friends who kept instigating him and he rolled on. His method to get back at their 'Sir' was by calling him names, slandering about his private life and yelling a open challenge to thrash him if he ever dared to reprimand him again in his class. After a few shots of liquor, his audacity knew no bounds. It had transgressed all morality and decency that underlines the demeanour of a student. He appeared confident in his belief that a teacher had no business in reprimanding his student for being inattentive in class. So as a fitting reciprocation he said that he must do what he must do. His impertinent speech earned the adulation of sycophants and they kept asking for encore after encore. He kept feeding them to the point when the whole ambience seethed with an insolent and vile butchering of the timeless sanctity characteristic to the connect between teachers and their scholars. The free winds of the campus effortlessly carried the impertinent words across it's hallowed walls, making them scream and plead with him to stop. Word reached of his unprecedented rudeness to the ears that never deserved to hear it. Nobody could prevent it from falling on the men who ran the institution. A proceeding was initiated seeking to make an example out of him to cause shudder in prospective teacher bashers. The board of trustees eager to strip him of his studenthood assumed their dignified places in the row of chairs. The villain was summoned. Oh, he had become one the moment he swore against a man who had been nothing less than a messiah for hundreds who followed his teachings and yet hundreds others who had earned enviable repute in the community of men under the aegis of that saint. They all smelled the villain's blood; relentless in their demand to have him ousted, his career damned, his future plunged beyond reprieve and the stand of their 'Guru' vindicated.

He walked into the hall through scorn and contempt of his peers, many among them being those who had adored his feats of the bygone night. He had realized his blunder the moment he had his mother look at him hopelessly with an unmistakable concern for her son's dying tomorrow. So he prayed, for his mother's sake, that whatever might be the climax, his dear beloved mother be spared of its torment. Considering the wish of the board that sought to punish him, the chances of that prayer being answered, seemed bleak. Then came his 'pals', one by one, none looking him in the eye. Heads hung, probably out of a vicarious guilt of having been the audience to his unabashed show of irreverence. Each of them spoke word by word, vividly reiterating his contemptuous utterings. No measure was spared by the board to inject into their testimony a feel of distaste and vendetta. He mustered his courage to look into the gallery where his friends sneered and snarled. The case stood closed. His guilt sealed for eternity. A tiny mortal, despised by time, left to be judged by history.

It was then that the Chairman asked the man, the saint, the teacher, whose authority everyone was so eager to safeguard and vindicate ' Anything you wish to impress upon, Sir ?' The man stood up. Looked straight into the Chairman's eyes and announced ' I may be pardoned by the esteemed board for what I've decided. But I humbly seek your kind trust in my decision.' And then he said what left the arena stunned beyond comprehension. 'I will resign from my job and retire from the profession of teaching, if this boy is not forgiven and he's not accorded a chance to redeem himself". In the eternal speechlessness of the many decorated men and women, a wail shot out from the depths of the villain's soul as he kneeled down in regret. His teacher, without wasting a moment, rushed to his aid and embraced him whispering into his burning ears 'I understand son, I understand'. He doesn't remember anything thereafter except the salvaging embrace of his teacher in defiling whom he had spared no word."

In a couple of years the boy passed out of the institution with a record of achievement no less than that of the best of his peers. And on 'Teacher's Day' that ongoing year, he narrated in detail about his guilt, the mercy and his redemption to all those who had attended the ceremony and ended his speech by saying "Thank You Sir for being the teacher that you are.". In a serene repetition of his act from that legendary meeting, his teacher again walked upto him and took him in his arms, this time receiving a warm reciprocation, and murmured "Thank You for keeping my faith" . He then took the microphone and said

"My Dear Fellow Teachers, wherever you are and whoever you teach, never ever stop believing in your student, for the moment you do, you end the greatness of being a teacher."