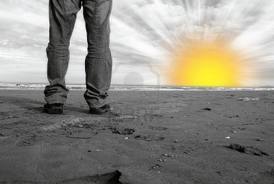 At the age of fifteen, when Nakul was an introvert backbencher in the seventh standard, he found a crumpled wad of fifty rupees note, partially submerged in the wet dirt just by the side of the common drinking water tap at school. He held up the note and made a circle on his feet scanning for it's heckled searcher.  Now the question that stared him in his face like a fire breathing dragon from the 5 P.M. cartoon show, was that, should he pocket it or put it back from where he picked it. He realized at that moment more than ever that he isn't a thief but it didn't belong to anyone around him either. It was an orphan waiting to be embraced and be consumed for buying all the rainbow hued candies and the plastic figures (at least one) of his favourite G.I. Joes. Who tells a young lad of his age that as a law abiding citizen he should have gone and deposited  the note with the head of the school leaving it at his mercy. Letting him do the duty of finding out the claimant of that sum of money. Nakul found it easier to believe in the theory that probably fate wants him to reap the gains of that piece of paper. What else could possibly explain why countless pairs of roving eyes missed it leaving it to be spotted by someone who hasn't been bestowed with the enviable fortune of being regularly afforded  pocket money. So he uncrumpled it, delicately slid his palm over it to rid it of creases and dirt and carefully folded his treasure, before shoving it inside his trouser pocket.

A fortnight later, the day after his birthday celebration, he and his classmates sat together to unpack his presents, splendidly confined in glamorously glittering envelopes. Halfway, Nakul's landline cried in its quintessential annoying tone demanding immediate attention. An irate Nakul rushed furiously to calm it down taking not less than ten minutes to return. Later that night as he curiously opened his secret wallet, one of his gifts from last birthday, to put in it the day's earnings and to calculate his savings for buying a special edition video game, he was aghast. Out of the expected sum of about two hundred rupees, only a hundred were there. His face flushed as he contemplated how the distance between him and his dream gadget stood increased by this heartbreaking revelation. He fell something heavy swell within him as tears unguidedly began to trickle down. He had no explanation for what had happened. Who robbed him ? Who was that thief ? A real scoundrel. His wordless outbursts were futile anyway, as he would have to start all over again. To his utmost horror, he recalled having mentioned about his clandestine scheme to his pals, among who one had zestfully queried about how he was hiding it from his folks. A gullible Nakul had showed them the exact spot where he had concealed it. For a moment Nakul was filled with an unapologetic rage to charge at his mate and interrogate all five of them who sat in his room that evening, but he dropped the idea fearing that he might lose them over a petty sum of money, though by no means he was hurting pettily.

A couple of years later, Nakul consciously indulged in something that he normally didn't subscribe to. But who can deny the great difficulty that's normally experienced in subsiding our adolescent urges. That evening Nakul fell prey to such a lack of will. He was quickly coerced into joining his mates in playing a practical joke on a friend. The events were shrewdly planned in a manner which lured their unsuspecting peer into sitting on a sharp pointed object. Luckily he didn't get hurt. But he had to walk home embarrassed with his trouser torn in the most private area. A few days later, Nakul met a similar fate for no fault of his, without any warning or announcement. It so happened that Nakul was just stepping down from the bus when his right foot slipped ferociously on the rain washed road and he  ended up in a full split that would have challenged a full time taekwondo practitioner. As he limped to the nearby shed, a kind old man graciously pointed out to him the urgency of hiding his rear which was peeping out of his trouser like a vegetable in an overstuffed carry bag. Blame it on the proximity between this incident and the night when his friend walked torn pant, it saw the dawn of reason on his nubile mind. He stressed himself over a seemingly uncanny nexus between the two events. They were deceptively similar to have prevented such a thought from crossing his mind. An hour later, Nakul was consumed by the usual inescapable senseless frolic that his buddies brought along and soon the residual thoughtfulness was long wiped from his head.

But the day which saw an unforgettable impression being engraved on his wits came in his twenty second year when he was duped into believing that his motorbike had been adequately replenished with fuel by his friend who had borrowed it from him. And some divine interference and scheme of providence prevented him from even coming close to opening the fuel tank for verifying the truth of that assurance. It happened thus. He was waiting eagerly for his friend's return, so that he could rush to see a female friend off at the railway station who was going away for a year and with whom his relationship was assuming cozier proportions and he planned on making it even cozier by professing his real feelings for her on the railway platform. Infact Nakul nutured the faith that she too was impatient to hear his confession. Nakul was already late and was furiously loitering on the porch and the moment his friend reached, apologizing for being late even before he got down from the vehicle, the skies opened their gates letting out a relentless deluge as if freeing the drops from captivity of ages. In a matter of seconds the nearest electric pole became blurred and the tirade of the liberated raindrops turned into a cacophony. Now there remained no chance for Nakul to check the fuel. Without a further  moment, he jumped onto his motorbike's seat and dwindled away in the misty rain. He must not have gone even a couple of kilometers when his bike started coughing like an exploited labourer. Nakul hoped against hope that his wheels wouldn't betray him. They didn't, his friend had. Dripping with rain from head to toe, he stopped on the middle of the road and unlocked his fuel tank only to find it dry as a robbed pitcher in a desert. People under shelter of the shops stared at him. He got down from the vehicle and parked it. He hoped to find a shared mode of transport. He couldn't. How could he, in that blinding downpour. As the time for departure of his beloved's train came and went away, he stood mute and helpless. He found himself sliding back in time.

A few weeks ago, he had taken his neighbour's scooter under the pretext of some urgent work, roamed around the by - lanes of the city till the scooter's tank was near dry, then returned it to him with an assurance in an inimitably sincere tone, that he had gone only a small distance and there was no need of refueling it. The next morning when the poor fellow began for his office, he came back pushing his vehicle within seconds of his leaving. Without his scooter, the nice man had to walk a whole ten kilometers to his office, hopelessly trying to stop every passing vehicle on the way for a lift. He reached an hour late to his workplace and his mercurial boss in plain and simple terms informed him that this day wouldn't count for his salary. Who could have saved an employee from the wrath of a vindictive head of a petty private construction company, .  He had waited so long to get even with his upright employee who unlike his sycophantic peers never called the moon sun, because their boss called it so.

As the downpour began subsiding, Nakul couldn't ignore the lesson he took six years and a few unfortunate instances to decipher. It began shaping into a coherent logic built upon a perfect correlation of apparently unattached events in his life. He thought all about them over and over, as he watched the last weak drops making their way from the heavens to the short lived puddles throughout the road. The inexplicable, frustrating loss of his saved pocket money six years back, his awkward moment at the bus stop and the forfeited opportunity of bidding adieu to his high school sweetheart, all began to torment him to the point of enlightenment about the divine law that whatever one gives comes back to him one day. He started walking down the steps of the shop where he'd been sheltering himself from the rain and smiled in surrender.

Months later Nakul was found jumping a snakey queue in a supermarket urgently pushing forward brushing aside frowning customers. He finally reaches the billing counter. The billing counter staff looked at him with alarm, wondering why the customer he sent off half hour back, has returned.

And how much did I keep ?

Here's the debit card slip and here's the bill. The latter says Three Hundred Ninety Five Rupees but it seems you swiped my card for three hundred ninety five paise only. Bet you'd have gone home about 390 bucks poorer tonight.

How can I thank you Sir ?

I'm sorry you had to travel back..er.how far had you gone Sir, just curious.


I'm so sorry Sir. You had to burn precious fuel. Sorry for that loss.

Ahh !! That's really thoughtful of you.

Believe me. I returned to save myself from losses.