The depths of insanity are explored by a man chasing something in his apartment with a shoe.

A man is trying to catch some sort of bug running around his room. He takes his shoes off and intends to crush it under the heel of his loafer. However as he slowly begins to track the bug down and trap it, things chance dramatically but the man continues his course of action.

Notice the complex mental element of the film. Nolan had it in his films from the beginning of his film making career.

Directed by Christopher Nolan in 1997 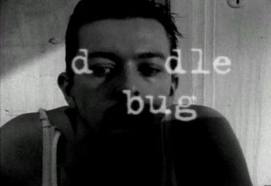