Justice In Jeopardy.. Resolving The Debate 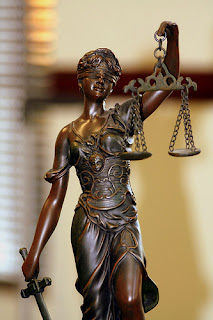 I write this article motivated by the query that a dear fellow blogger, Rahul V. Nair (who blogs at freedomofexpression ) put to me as thus, after reading my article Justice in Jeopardy... Why ?

"Hi Anupam Nice Post, could you pls explain how our Judiciary should be upgraded for future( I would like to know about it in detail)and how allotting more money in the budget can help it. I am just curious to know about it that's all, hope u won't mind telling."

First of all I heartily thank Rahul and all other readers who gave their valuable time for reading Justice in Jeopardy... Why ? and sharing their precious opinions in this regard. As I have mentioned earlier in that article. I wrote it when I read another article called "Justice In Jeopardy" written by a learned fellow blogger. I had to write it, especially when I read the comments of people who read her article. Judiciary is so often misunderstood and for all the misinformed reasons. So I took it upon myself to clarify a few issues. So that people can make informed opinions then. It was after reading my article that Rahul has asked his question and I'm more than glad to answer his query.

I don't mind at all answering his highly significant question. Half way replying to his comment / query I decided to dedicate a full post for it.  As for his question, it's very difficult to write everything I want to say. There are so many intricate issues that provide the lifeblood for our judiciary that it's difficult to concisely put them in a single answer. However concentrating on the two major issues that I'v dealt with in my article viz. delay in disposal of cases and mechanism of investigation, I'll state some bullet points which in my humble opinion could be crucial in improving the present state of affairs.

Let me first deal with the delayed justice aspect. It must be borne in mind that the actual rate of disposal of cases per judge has been consistently improving in recent years, but the rate of institution of proceedings has been growing at an even faster  pace. It is this growing gap between the rate of disposal and the rate of institution of litigation that is a cause for worry. It is in response to these problems, that it is important to implement effective strategies for proper case management. I'll say that there needs to be a phase wise exponential increase in the number of Courts and Judges all over the country. Now that includes increasing the number of Courts in a district, appointment of Court staffs, building of infrastructure to let the Courts function in a dignified manner.

The approach has to migrate from adversarial system to re conciliatory wherein instead of fighting out long drawn legal battles, parties with the assistance of Courts and their advocates are able to mutually come to a settlement in an expeditious manner. Several such methods such as Lok Adalats, Arbitration techniques, Conciliation proceedings have to be given utmost significance for dispute resolution. These are popularly known as ADR (Alternate Dispute Resolution) techniques . However this is more likely in relation to civil disputes than criminal cases. Since crimes are treated as wrongs against the society rather than as wrongs against the victim only.

Case management and planning is also vital to the functioning of a modern judiciary. Its implementation will however at some stage require serious reflection on the changes required in our system. I am however confident and  optimistic that if implemented appropriately it will go a long way in addressing the problems of arrears and delay.

Then there have to be substantial changes in the procedural laws of our country, which I believe, more often than not, tie the hands of Courts from coming down heavily on protracting litigators. This includes mandatory large amount of fine / costs imposable on parties who deliberately delay hearing of their cases and mandatory fixation of time limit for disposal of cases, particularly sensitive cases like crimes against women and terrorism cases. These will make a significant improvement in the rate at which cases are being disposed of today. One must understand that no Court or Judge would like to see his office stacked with a large number of case records. Courts are always inclined to lessen their burden. It's a natural tendency. But co operation must also flow from the litigators including their respective lawyers, who must make it a point not to delay hearing of their cases.

The Govt. also needs to substantially increase the number of Fast Track Courts and special courts, and come up with special tailor made procedural laws which would govern their functioning. For example a fast track court set up to adjudicate upon the trial of certain alleged terrorists cannot expedite the trial in a noteworthy manner, if it too like normal Courts is guided by the same laws with regard to procedures of hearing and adjudication.

The second most important aspect of dispensation of justice demands a fair, fearless and effective investigation. So that the Courts have before them a clear picture through the evidence collected by such exemplary investigation. Investigators have to be free from all kinds of political and / or institutional pressures in performing their duties. In several cases delay in hearing occurs due to non attendance of official witnesses especially Police witnesses. The Police deptt. is understaffed and they find it difficult to manage their time between attending to highly urgent duties of law and order management and their task of attending equally important Court proceedings and giving their evidence. My humble suggestion is to separate a specific department of Police dedicated to investigation and giving evidence in cases. This would solve the problem of their unavailability to testify in Courts as well as help in timely adjudication of cases.

The much talked about witness protection program is also a crying need of the hour. Since it is often seen that witnesses say something to Police at the time of investigation but change their stand when it comes to testifying under oath before a Court. This results in the acquittal of the accused persons leading to a popular belief that Courts are incapable of punishing the guilty. What can be done here is that witnesses have to be given assurance of real protection and if need be rehabilitation in lieu of their truthful testimony in Courts. But this requires indulgence of honest officers at all levels of this system. If any witness suffers despite such a witness protection scheme, no one will ever come forward to testify the truth in Courts.

Furthermore there needs to be a realistic system of expenditure reimbursement of witnesses who come to the Courts. One which would adequately repay them the expenses incurred by them in coming and testifying for a case. It is also important that the mechanism which allows this facility is a swift one and the reimbursement is done without much hassle to the witness. It is also required that if the party who is supposed to examine / cross examine a particular witness on a given date of hearing, intentionally evades doing so, without any just cause, for unduly harassing the witness or for any other mala fide purpose, he be made bound to pay adequate cost or compensation to that witness. If such actions are still repeated then there must be some law which mandates forfeiting that person's right to ask any question to that witness thereafter.

I've also been asked as to how allotting more budget for the judiciary will help in improving it. Isn't it obvious that all the above initiatives will require infrastructure, appointment of staffs etc for which budget is an indispensable essential. Its a complete mockery that the very institution which is often quoted as the last hope for the exploited and the injured, is so neglected. The Govt. has to make a specific planned budget allotted to judiciary, much more than the present share it accords for it so that all the above aims are achieved in a time bound manner and the hope of common man is redeemed in the justice delivery mechanism. No nation which aspires to have a sound and corruption free governance can claim to achieve it without strengthening its judicial system first.

The readers must understand that there are several technical aspects which also require substantial focus for a holistic upgradation of our judiciary. The issues which have been discussed here are only a few of those. The discussion is much complex and multifaceted to be confined to a single write up. Hence readers are advised not to construe these factors as conclusive or exhaustive in determining the future of our justice delivery mechanism.