I wrote a script, the dialogues and even the screenplay. I went ahead to shoot. Halfway I wished I had better actors. Actors who knew what is acting. So I aborted the shoot. I contacted a few struggling yet talented performers of theater. But they were either reluctant or wanted a substantial pay. So I had to make do without going ahead with that film. This happened a couple of days ago.

Came back and worked out another theme. One that didn't involve much acting or performance or even dialogues  (as dialogue delivery is unquestionably the most vital aspect of acting) I asked my cousin brother to play the part.  I based it's theme on my poem "Soul's A  Vagabond" and gave the video the same title. I took the consent of a very talented music composer who features his works on Youtube and put one of his scores in my film's background.

After half day's shoot at multiple locations I edited it and uploaded it to my Youtube channel yesterday. Obviously I'm not happy with the results, but I'm glad that after waiting for days and only making videos with still pics., I managed to take a very small step forward.

It's may be an ordinary video. But it'll always be special to me because it's my first motion film. 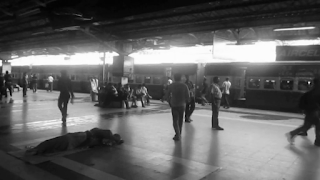 aspirations and keeps moving between various places. His lack of aim is manifest in his
vagabond ways. Ultimately, he ends up before the abode of God seeking answers.