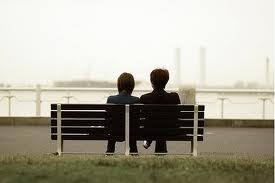 DAY- RESTAURANT - A TABLE IN THE MIDDLE

Mahesh is with a girl in the neighbourhood eatery. Girl's face is not revealed.

It's quiet all around. They are the first guests of that morning. Both seem to be loving the fact they are alone and the whole staff of the eatery is focused on their comforts. It's a fresh morning and the sunshine is beaming hopes, scattering them like a kind dispenser.

(Fiddling with the fork) Such games of life have always restored my faith in what I believe.

While I tread, looking for chance, over a promising boulevard, It stealthily slips another from an alley where I never cared to offer a fleeting glance.

When I touched your heart unplanned, I was planning unaware, for the same.

Girl stretches her hand and slips her fingers in between Mahesh's forming a warm loving grip.

His bed is all ruffled and creased due to it's restless occupier's sleeplessness. A few folded pillows & a whole crumpled sheet, speak abundantly of his miserable attempts to  pass into the tranquil arms of sleep in the bygone night. Some soft 90's love song playing gently on his Sony Music System. The  LED indicator dancing to the rhythm of it's melody. The T.V. is playing, though mute. The program being broadcast is 'The Highlights Show'. Two men chatting, occasionally giving wide flashes of smile with Messi's picture in their background.

Mahesh tip toes out, with his bare upper. He's loosely clutching his untied towel. Water's dripping from his body. He's shivering. Leaves the bathroom door ajar. Quickly flings open his wardrobe.It's replete with  multi hued, crisply pressed shirts all hanging in discipline. Beneath them is a row of neatly folded trousers, jeans. Besides a section of pristine neck ties.

Mahesh is perplexed. Shuts his eyes, thinks for a moment. Runs his finger on a couple of shirts as if he's counting them & dashes for a navy blue one.  He takes a good look at it from all angles, quickly swapping it between his right hand & left.

Mahesh (Mumbling to the Shirt)

Ruffles the trousers, picks a modest one of a very light shade, tucks his shirt into it. Finds his belt and slips it through the holders, one by one, counting them steadily. He walks to turn off the power switch of the TV. Just then his cellphone begins to vibrate aloud.

Mahesh stops abruptly, rushes to answer it. It's someone important. He gets engrossed in some serious talk. He frowns a couple of times. Meanwhile a vehicle honks incessantly at the Parking Area. Someone yells his name repeatedly. Mahesh hears it but does not respond. Minutes later there is knock on his room's door. Mahesh opens it. It's his friend Mak. An obviously irritated Mak throws his hands in frustration. He can't believe his eyes when he sees that Mahesh is talking over phone.

Good Lord !! Where are your damn ears, pal ?

(He starts walking. Halts midway. Turns around as if he just noticed something really strange)

Wait! (Looks disapprovingly) What, on this earth are you wearing ?

Mahesh continues with his talk over his phone, paying no heed. But both start walking out.

(Over phone) Nothing to worry about, Mr. Singh. Your requests are always afforded high priority. I give you my word.  Alright alright, take it easy now. Listen, Singh Saab I've to go. See you 'morrow. Bring along the blueprint. Have a great day. Bye (Hangs up)

I'm asking for your car keys.

You want to drive ?
Aren't you supposed to be nervous and your thoughts be in quandary ?
Tell me one thing my friend. How long has it been been since you last pressed clutch ? As far as I remember you hate driving in this city's traffic, even when your dear friend is reeling under exhaustion begging you to take the wheels.....

Oh, give it a rest now, will you ? Give me those keys.

Mak throws the car's keys over to Mahesh. They get inside the car, Mahesh turns on the ignition and finally they start moving.

INSIDE THE MOVING CAR

My friend, could you please explain what you are wearing ?

Listen why don't we buy something better, something relevant for you to put on. It'll just take a few minutes, with my accurate sense of 'what'll match who" and then we'll be on our way

Relevant ?!..Whatever that's supposed to mean.
But No Thank You

(Laidback) Sure. Just don't tell me I didn't warn you.

Come'n Mak. You know it's not like that. She doesn't really care.

That may be, but don't YOU care about your first impression ?

How can you be so naive' Mahesh ?

What are you tryin' to say?

I wonder if you've ever come across the word 'pretend'. 'Cuz clearly you can't see that she is just pretending to be extra good. That's all. Don't get me wrong. That's normal of her to act like this. She doesn't necessarily have to be what she claims or pretends to be. I mean in all likelihood, she must be expecting the same from you.

Now, that's some serious nonsense. I mean how do you even know that she's pretending ?

(Sarcastic) Forgot the times when you used to come running to me asking for tips to woo her ?
Forgot those witty small talks that I fed you to be in control of your 'virtual' affair?
Forgot those tricks I filled you with to win a date with her ?

Slow down buddy. That's not what I mean. I'll always be thankful for all your help and ...guidance...and tricks. But I'm simply curious to know how you come to conclude what you are saying about her.

(Ignoring Mahesh's attempt at calming him)

Please watch the road when you're driving. Drinking and driving isn't the only cause of road fatalities.

Listen. All I'm asking is what makes you think that she is not what she appears to be.

I just know. Like I told you. It's pretty OK to act thus. In her situation - anyone would have done the same.

But that's precisely my point. How do you know that I'd have or for that matter I have acted or pretended to be a better person than what I really am..

For an 'impression' my friend. Have you ever heard of it buddy, because normal people have. People try to create impressions, especially and particularly "first impressions" on their first date. Which for some inexplicable reason doesn't seem to be getting into that thick head of yours.

But in this situation, don't you think we can afford discounting the greatness of "first impressions" ?

Why ? Because you think she' has already formed her impression about you, over your chatting sessions? Is that why ?

Yeah, that'd be why.

I find your ignorance hilarious Mahesh

Look. You think you have an impression. That is far from being true.

Even assuming you are right, what's the guarantee that she won't displace that "impression" when she looks at you today and inevitably thinks of you as somebody so .......... ( skeptically scans Mahesh from his head to toe ) .... ...BLAND.

I can't help myself from wondering how tedious it'd have been for you to amass such opinions.

Naah, it's bound to come when you are dating girls since your wonder years. It dawns on you after those many sessions, that you are a natural .

I'm sure it does.

Just look at your clothes man !! They are not what you wear to your first date.

And when that date is with someone who hasn't seen you ever and with whom you've lasted two springs chatting over some online social chat room or whatever. This is why I'm so bothered about real first impressions.

Hey, I'm concerned too. But not about what I'm wearing.

And why is that ?

Because I'm confident that she is more of an inner beauty person.

I mean I always find her as someone who is more interested in character than looks. Though I'm worried how she's going to figure that about me.

What about presents? Aren't you going to buy any token of your feelings - any symbol of your heart that you are holding out for her ?

She wouldn't tell me. Her online username is "lily1984"

Nothing brother. Just awed by your guts to go on a blind date. ..you know, risking so much for the unknown ?

I hope your date doesn't turn out to be a dude.

Mak notices a cyclist abruptly cutting into the path of their speeding car. His eyes widen in alarm and he presses himself to his seat and screams

Mahesh swivels the car and manages to evade the cyclist but couldn't prevent it from hitting another girl riding a Scooty.  (....Contd. in Part - II)