The Conversation VIII (On Jammu & Kashmir....) 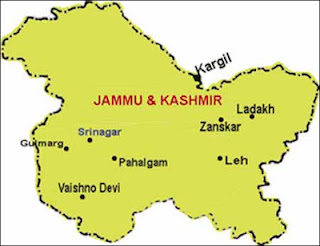 Avinash: There's always this ongoing hue and cry surrounding the state of Jammu and Kashmir, so much so that the oft quoted 'heaven on earth' is no more remembered for lush green valleys, snow capped hills and mountains or its idyllic beauty, rather it has degraded into an issue hogging the newspapers, news channels or for that matter the politics of our country and those of our neighbour Pakistan.

Me: Yeah, I could not have agreed with you more. Its ironic that what's called the heaven on earth, is now the breeding ground for hatred and relentless violence in some form or another. But if you must know, its not just another state of our country. But a special state and its specialty originates from the pages of our history.

Avinash: I'll be glad to hear about it, if you tell me.

Me: Sure. Under Article 370 of the Indian Constitution, the state of Jammu & Kashmir enjoys as special status. Now to understand & properly appreciate the cause of that special status we have to go back in history.

Me: The state of Jammu and Kashmir was created for the first time with the signing on March 16 of the second Treaty of Amritsar between the British East India company and Raja Gulab Singh of Jammu. It was an addendum to the Treaty of Lahore signed one week earlier on March 9, 1846 which gave the terms of surrender of the Sikh Durbar at Lahore to the British. The Sikhs couldn't pay part of the demand made by the British. Gulab Singh stepped in on their behalf to pay Rs.75,00,000, and in return received Kashmir Valley, part of the Sikh territories, to add to Jammu and Ladakh already under his rule. Gulab Singh accepted overall British sovereignty.

Like India the state of Jammu & Kashmir also became independent on August 15, 1947. The ruler of the state Maharaja Hari Singh did not quite approve of becoming part of either India or Pakistam and sought to preserve the state's independence. But due to numerous grievances harassing the people of the state there was widespread unrest. When people in India saw that independence has been won by the rest of the nation, they raised their voice in demand to end the autocratic rule of the Maharaja and asked for popular method of elections, wherein they would democratically choose their representatives. The Maharaja found himself in a tight spot amidst the chaos. To add to his woes, Pakistan interpreted the absence of any formal agreement between India and Kashmir, to mean that eventually the state would become a part of Pakistan rather than India. It even began pressurizing the Maharaja to join Pakistan. The people of the State were tired of the uncertainty and there occured the 'Poonch Revolution" against the authority of Maharaja. Realizing that he could no longer subjugate the Kashmiri people, Maharaja Hari Singh gave up his dream of independence.

Avinash: So did he accede to India ?

Me: As a matter of fact he did. But only as a means to survive the onslaught of thousands of tribesmen supported by the Pakistani army. His accession was provisionally confirmed by the then Governor of  General of India, Lord Mountbatten. after the Maharaja duly signed the Instrument of Accession on 26th October, 1947, until such time until as the will of the people can be ascertained by a plebiscite (a plebiscite is a direct vote in which an entire electorate is asked to either accept or reject a particular proposal), since Kashmir was recognized as a disputed territory. Thus the state of Jammu & Kashmir became a part of India. The accession was eventually confirmed by the people of the state through their Constituent Assembly on 17th  November, 1957. The Constitution of Jammu & Kashmir says that "the State of Jammu & Kashmir is and shall be the integral part of India".


Avinash: Are you saying that the state of Jammu & Kashmir has its own Constitution despite being a part of India ?

Me: Exactly. You see Article 370 of the Indian constitution, which is of a temporary nature, grants special status to Jammu and Kashmir. Under Part XXI of the Constitution of India, which deals with “Temporary, Transitional and Special provisions”, the State of Jammu and Kashmir has been accorded special status under Article 370. Even though included in 1st Schedule as the 15th state, all the provisions of the Constitution which are applicable to other states are not applicable to J&K. For example, till 1965, J&K had a Sadr-e-Riyasat for Governor and Prime Minister in place of Chief Minister.

Avinash: Can you tell me the major implications of Article 370.

Me: Well, to put it very succinctly, as per the Article 370 of our Constitution, except for Defence, Foreign Affairs, Finance and Communications,(matters specified in the instrument of accession) the Indian Parliament needs the State Government's concurrence for applying all other laws. Thus the state's residents have lived under a separate set of laws, including those related to citizenship, ownership of property, and fundamental rights, as compared to other Indians. You open any statute book, most of it will from the beginning declare that the law mentioned in the forthcoming pages shall apply to the whole of India, except the state of Jammu & Kashmir. This holds good for all crucial laws including our Indian Penal Code.

Avinash: What laws of our land apply to Jammu & Kashmir ?

Me: As I mentioned earlier, the President is empowered to extend certain laws, which he deems fit, to the state of Jammu & Kashmir. A few of them are

Avinash: Do all these still apply ?

Me: Yes they do. in fact I have heard that the Centre's interlocutors panel on Jammu and Kashmir has recommended setting up of a constitutional committee to review all central Acts and Articles of the Indian Constitution extended to Jammu and Kashmir. The purpose is to determine how the application of these laws has dented the special status of J&K and curtailed the state government's powers to cater to welfare of its people.

Avinash: Al right. So the state of Jammu & Kashmir is indeed unique for our country.

( The facts and matters mentioned in this post are confined to those aspects of history, politics and law which according to the author are relevant to the present discussion. The author does not claim that they depict the entire facts as they stand, concerning the topic, nor is it denied that there could be lapses in the depiction. The readers are sincerely advised to make a detailed study of the matter for holistic information).