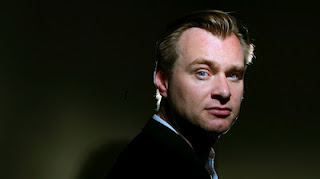 At times you come across such a phenomenally creative soul that you are perpetually left in awe of him. For me Christopher Nolan is one such flim maker. I'm a big fan of Christopher Nolan's works. My ultimate reverence for the greatest story teller of our times. His vision behind the camera and his stories, & screenplays are impeccable. Memento, The Prestige, Insomnia, Inception, Batman Begins, Batman - The Dark Knight & now the Dark Knight Rises. His films have left me absolutely spell bound and in awe of his cinematic genius. He is indisputably one of the best storytellers of our times. What I totally admire about his films, is the way he embeds deep rooted messages in them, even in supposed comic book adaptations.

Nolan spent his childhood in the United States and England, and later studied English literature at University College London, which he chose specifically for its film-making facilities. There he made a series of short films in the college film society, and met the friends with whom he would later make Following (1998), his independent début feature.   Doodlebug (1997) is a three minute film about a man chasing an insect with a shoe around a grotty flat, only to discover on killing it that it is a miniature of himself: seconds after he himself is crushed by a larger version of himself. Nolan wrote, directed, co-produced, photographed, and edited the film.  Watch it here.

The Dark Knight Rises is an upcoming superhero film directed by Christopher Nolan, who co-wrote the screenplay with his brother Jonathan Nolan and the story with David S. Goyer. Based on the DC Comics character Batman, the film is the third installment in Nolan's Batman film series, and is a sequel to Batman Begins (2005) and The Dark Knight (2008). The Dark Knight Rises is intended to be the conclusion of the series. Christian Bale, Michael Caine, Gary Oldman, and Morgan Freeman reprise their roles from Batman Begins and The Dark Knight. The film takes place eight years after the events of The Dark Knight and introduces the characters of Selina Kyle and Bane—portrayed by Anne Hathaway and Tom Hardy, respectively—two villains from the Batman mythology. In this final part, Batman confronts Bane, his most powerful nemesis. Bane has been one of Batman's more physically and intellectually powerful foes. A virtually unstoppable force, he is best known for breaking Batman's back in the story arc. 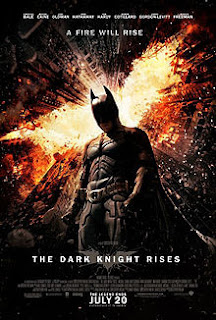 I share this post & these videos with you guys to do my bit as a fan of Chris Nolan. Here's the trailer of the epic conclusion for the Batman trilogy, Batman: The Dark Knight Rises. Its been out since quite some time now. Watch it here

In case you haven't seen any of the previous Christopher Nolan's Batman movies, I'm giving you the trailers hoping that you'd watch them and then see the movies before Dark Knight Rises, so that it all makes sense to you.

I promise you that there's so much you're gonna take back from these movies than just the awesome action sequences and the sensational background music by Hans Zimmer.

Know what ? Batman : The Dark Knight Rises has already won the " Most Anticipated Movie " at Spike TV Scream Awards 2011 (Click for video of the award).


Check out the local date for theatrical release & enjoy this masterpiece in a THEATRE.


Now before you leave just check out these terrific lines spoken by characters in the Batman:The Dark Knight. These are my personal favs. I apologize if I've left any other awesome lines from the film


Harvey Dent : "You either die a hero or you live long enough to see yourself  become the villain."

Harvey Dent: The world is cruel and the only morality in a cruel world is' chance'. Unbiased, unprejudiced, fair."

Alfred: "Some men aren't looking for anything logical, like money, ........they can't be bought, bullied, reasoned  or negotiated with. Some men just want to watch the world burn."


Bruce Wayne: People are dying Alfred, what would you have me do ?


Alfred: Endure Master Wayne. Take it. They'll hate you for it, but that's the point of Batman...he can be the outcast. He can make the choice no one else can face. The right choice.


(On people) "Their morals, their codes...its a bad joke. Dropped at the first sign of trouble.;They are only as good as the world allows them to be. You'll see..I'll show you, when the chips are down, these civilized people...they will eat each other."


"Guns are too quick. You don't get to savor all the little emotions. See, in their last moments people show you who they really are...."


"I'm a man of simple taste. I like gunpowder, dynamite, ... gasoline. And you know what they have in common? They are cheap."


"All you care about is money. This city deserves a better class of criminals & I'm going to give it to 'em."


"Nobody panics when the expected people get killed. Nobody panics if things go according to plan, even if the plan is horrifying."


"Introduce a little anarchy, you upset the established order and everything becomes chaos. ...And you know the thing about chaos, Harvey ?....It's fair."


"Madness is like gravity; all it takes is a little push"


"This is what happens when an unstoppable force meets an immovable object"( intending to tell Batman that he's never gonna give up creating trouble and Batman is never gonna stop from trying to prevent him from doing so.)


Batman: "Sometimes truth isn't good enough. Sometimes people deserve more. They deserve to have their faith rewarded." (On conjuring up a lie, if that's the right thing to do).