A Reminder For States Where 'Khaps' Are Thriving 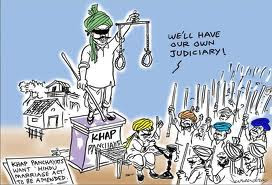 There is no disputing the deplorable truth, that the lawful Government of States, where something utterly unlawful as 'Khap' panchayats are thriving unabashedly,  are in denial of the related perils. From the various things that we have been hearing, watching and reading about the recent illegalities committed by the Khaps, nothing further remains to be said. It is not at all complex to ascertain, that the Khaps are perpetrating crimes. Therefore the only thing that now needs to be done is to remind these State Governments about the legal duty incumbent upon it in this whole episode, hoping that in order to save their own skin they won't be as dismissive about the issue as they are being now.

The following reminder purports to be succinct yet highly relevant

503. Criminal intimidation.—Whoever threatens another with any injury to his

person, reputation or property, or to the person or reputation of any one in whom that
person is interested, with intent to cause alarm to that person, or to cause that person
to do any act which he is not legally bound to do, or to omit to do any act which that
person is legally entitled to do, as the means of avoiding the execution of such threat,
commits criminal intimidation.

Section  40. Duty of officers employed in connection with the affairs of a village (see below for meaning) to make certain report

(1) Every officer employed in connection with the affairs of a village and every person residing in a village shall forthwith communicate to the nearest Magistrate or to the officer in charge of the nearest police station, whichever is nearer, any information which he may possess respecting—

(iii) the words “officer employed in connection with the affairs of the village” means a member of the Panchayat of the village and includes the headman and every officer or other person appointed to perform any function connected with the administration of the village.


(The Court had directed that a copy of it’s judgment be sent to all Chief Secretaries, Home Secretaries and Directors-General of Police in all States and Union Territories, and circulated to all officers up to the level of District Magistrates and SSP/SP for strict compliance. )

Therefore it's high time that someone moved the Hon'ble Supreme Court or the Hon'ble State High Court of the concerned state against the accountable Government officials, on the strength of the aforementioned legal provisions and / or the aforestated directive of the Apex Court in the wake of recent atrocities perpetrated by the Khaps.