(This is the story of the family of four sparrows that lived outside my room's window, when i was a kid. I saw them everyday. They were a part of my life. I had seen them in joy and sadness alike.  One day I found that one of them fell down and died. I was a little shocked thinking why it didn't try to fly when it fell. But it took me years to understand that there was something else, something man made that killed it. It was supported by the fact that the rest had flown away too. It was unbearable for me to see their deserted nest. But no one else seemed to notice.)

Just couldn't get that thought out of my head, hence here's a song I wrote for the Sparrow:-

Before I could go to sleep again, it chirped and chirped,
Now I sat wide awake on my bed so disturbed;
Threw the pillow, pushed the quilt with a frown
Rushed to the window and looked up and down 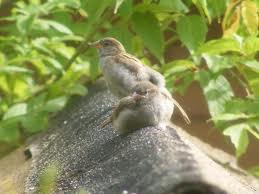 When I looked to my left
I saw a cozy nest
Was I fuming seconds ago ?
My face was now a beaming logo


There it stood , it jumped & hopped,
All around the place
It was so difficult to catch its face
Then came another and a twig it dropped;


I know not what happened
But the birds' elation was easily sacrificed
Was it so great a burden
On a choice so mundane
Anupam P.

Did you know that "World Sparrows Day" was observed on March 20th. To watch a sparrow's chirpy and quick movement is a source of tremendous joy. I just read an article which says that sparrows are rapidly declining in number due to loss of their habitat owing to swift urnbanization. In China they even consider the bird as a pest. Unbelievable !!