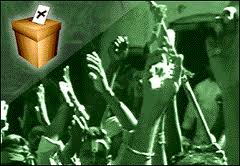 This is the destiny of democracy, as not all means are acceptable to it and not all practices employed by its enemies are open before it. Although a democracy must often fight with one hand tied behind its back, it nonetheless has the upper hand. ”

In the wake of long perpetual assaults on democratic ideals, one would have us believe that perhaps India is undeserving of democracy. Perhaps its citizens are too callous to appreciate and revere the priceless gifts of liberty and freedom that come wrapped with democracy. I've often heard my peers remark in sheer rage, "Is desh ka kuch nahin ho sakta...Aur Banao democracy ise... Are humein democracy nahin, military rule ki zaroorat hai (Nothing can save this country...keep hailing democracy. The fact is that we deserve military rule and not democracy). It doesn't require a remarkable deal of aptitude to understand the reasons behind such hopelessness. Since the time we attained sovereignty and independence, most of those who had been since conferred with power, have abused it to some extent. The range of such abuse spans from having a free meal to stashing away billions in benami accounts. Despite lack of complete official confirmation of such abuse people are aware, more than ever that persons in whom they rested their faith for ushering in a better tomorrow, have betrayed mass expectations for their individual gains.
Democracy is the only form of governance in which the will of people is supreme. Therefore there exists a constant process of appeasement of popular sentiments in the form of minority wooing & election oriented policy making. But it's ironic that the real purpose for which people choose representatives is totally belied. That includes, though not limited to, improvement in welfare measures, education, healthcare, economic empowerment, security and justice delivery system. It's not difficult to understand that if pleasing people is what it takes to remain in power, why aren't beneficial steps being taken in order to improve their quality of life. It's indubitably because of the reason that taking such steps would naturally entail expenditure of Govt. revenues and other State income, due diligence, sincerity and a completely corruption free work culture, which at least in the current scenario seems as impossible as cheating death.

Another essential feature of any democracy is its justice delivery mechanism, which in our country, has suffered an erosion of faith. This is mainly because of the delay in conclusion of Court cases and the seemingly large number of apparent criminals escaping punishment. But most people misunderstand the causes behind these maladies. (For a discussion on this issue read this ). Be that as it may, in a democracy, the manner in which justice is administered by Courts rests largely on the principles of natural justice. In such systems the thrust is on two major norms. Firstly, no one shall be condemned without having been provided with an opportunity of making his defense and secondly no one shall be a judge of his own cause. While the former ensures that every man has a chance of being heard the latter prevents possibilities of bias creeping into the judicial process. In according opportunity of being heard, the person accused, is provided with all fair & reasonable means to make such a defense. It is this particular scope, that has been the subject of all kinds of exploitation and abuse by persons thriving on ingenuity. One cannot help but lament at the cause for which such a facility was accorded to accused persons in the first place and the resultant manipulation that it has been made subject to at the hands of the cunning & the crafty. A hundred guilty may go free but one innocent man should not be punished. This has been the code of the entire judicial process that our Constitutional drafters created. Obviously they had an oppressed, exploited and a truly innocent accused person in mind while injecting this principle into the entire system. Little did they know that the men in whose hands they were bequeathing the freedom were the least capable of handling it.

I often see elite, erudite scholars analyzing hundreds of issues concerning the welfare of our nation. They are ready with theories, analyses for each situation. The media shows a keen interest in creating an optimum environment where there'd be free exchange of such stimulating thoughts. So many scandals have been unearthed. So many politicians have been brought under the scanner. Yet they prevail in the end. They manage to climb back to power. That too by votes, not by magic. There could be many causes for that. One of the startling causes however remains the apathy and indifference of the people who listen to those debates and discussions of those scholars and happily wake up the next morning and embark themselves upon their private pursuits. On the contrary people who matter to say the least - tribals, uneducated minorities living in remote areas, right wing, left wing, fanatics, poor farmers and villagers, never hear these debates. They are ultimately the cause for the electoral outcome.

However, despite such difficult scenarios, democracy remains the best form of governance. The simple cause  being the existence of regard for civil liberties and fundamental rights of its subjects, in a democracy. It is needless to say that when tremendous significance is ascribed to rights and liberties, there's bound to be some collateral damage in the form of hijacking of such facility. That's the paradox of the times we live in and the irony of the lives of so called the aware and educated mass. However in the recent times Anna ji may have captured the imagination of these sections of our community which, hitherto only indulged in sulking but doing nothing about it. They finally gave up their bread earning pursuits, may be for a few days, and joined a mass agitation. People who know, know, that this may actually end up solving nothing, for the real cause of worries lies somewhere else. However it did shake the power corridors out of the notion that the common man is not only living to earn his daily bread. Given the right galvanizing factor, he too can stand up and cause commotion for his rights. This again is another beauty of democracy. It offers a chance at redemption, at gaining for lost stuff, for standing and shouting for our rights. Had we not been a democracy, Anna ji, like Aung San Suu Kyi, might have been thrown under house arrest indefinitely.

A few years ago, when the Hon'ble Supreme Court was seized with adjudication upon issue whether narco analysis and brain mapping procedures used by investigating agencies on suspects for extraction of information, is valid or not, the Court decided against the use of such methods. Though there was widespread frustration among investigative agencies, including the CBI on having to relinquish this technique of investigation, it cannot be denied that involuntary administration of narco analysis on criminals is against their fundamental right to life and liberty and their right against self incrimination. The Court held that narco-analysis test, polygraph test and compulsory brain mapping of the accused persons are violative of Article 20(3) and Article 21 of our Constitution. Many people may disagree with this verdict. But that's the way democracy is expected to function. The Supreme Court while so deciding took into consideration various studies which show that what a person may speak during the test may not be entirely credible, since there is a possibility that drug induced revelations may not necessarily be true. Being aware that its decision will cause serious discontentment among investigative agencies, the Hon'ble Court quoted the aforementioned statement of Justice Barak, a renowned Judge of the Israeli Supreme Court. The full judgment can be read here .

So the point is, that despite serious setbacks, democracy is too precious to be substituted by any other form of governance. It gives us the chance to oppose, to speak freely, to raise our voice to criticize and to protest. No country is perfect. What's therefore important is that there should be a constant effort towards achieving that perfection. Democracy affords that opportunity. There are a few other forms of governance in various countries. Experience has proven that they are not ideal either, despite not being democracies. But unlike in a democracy, their civilians have the least scope of raising their voices and protesting against what they feel is wrong. So also it is often seen that there is always a perpetual inclination towards democracy in non democratic countries but not the vice versa. The irresistible deduction therefore is that no matter how frustrating it could be to witness democratic ideals being manipulated and used for perpetrating wrongs, it inevitably remains the best choice of administration, if not for anything else, for the opportunity it accords for making things better without having to resort to non violent methods.