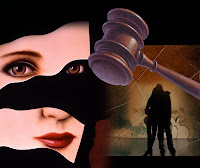 Avinash: (Reading from the daily " The Express")

Me: That's the provision which deals with the crime of adultery

Avinash: How much jail time are we talking about here for both ?

Me: Upto 5 years with or without fine. And that's not for both.

Avinash: What do you mean ?

Me: I mean only the man will get punished, of course only if the charges are proved.

Avinash: Why? What about the woman ?

Me: You see, as per Indian law, a woman cannot be punished for committing adultery. Its only the man indulging in adultery who can be proceeded against and punished.

Avinash: What ? Are you serious ? I mean even if the woman is equally guilty, she will go scott free. This can't be. It doesn't sound logical. I mean after all law is largely based on profound logic isn't it. Then how can law let go off the woman if she has consciously or deliberately committed the crime of adultery.

Me: I agree that law is more often than not built upon the edifice of sound logic. But sometimes a logic becomes outdated and antiquated due to changed circumstances and therefore the logic as well as the law which it supports, both become questionable. Before I say anything further let me first quote the relevant provision. Section 497 of the IPC defines the crime of adultery and prescribes punishment for the same in the following words :-

"Whoever has sexual intercourse with a person who is and whom he knows or has reason to believe to be wife of another man, without the consent or connivance of that man, such sexual intercourse not amounting to the offence of rape, is guilty of the offence of adultery, and shall be punished with imprisonment of either description for a term which may extend to five years, or with fine, or with both.

In such case the wife shall not be punishable as an abettor."

If you read section 497 carefully, you'll notice that the target of the law is the man and not the woman. The provision does not contain words like "whenever a man and a woman have sexual intercourse knowing or having reason to believe that the other is the someone's wife or husband, as the case may be,.....both shall be guilty of the offence of adultery....etc etc" Hence the woman in question is not culpable for adultery which she may have committed.  Not only that, the wife shall not even be punishable as an abettor.

For your information, an abettor is a person who aids, helps, instigates or indulges with another to commit a crime. Thus the woman cannot even be booked as an accomplice for adultery.The mere fact that she is a woman makes her completely immune to the charge of adultery and she cannot be proceeded against for that offence.

Me: As for the logic behind this provision, section 497 is based on the archaic presumption that a woman is always the naive accomplice deceived and tricked onto bed by a shrewd philanderer, therefore she should be exempt from any punishment, not even as an abettor. The recommendations of several Courts to change this law and make the woman equally culpable for an act of adultery, in view of the changed times, has not yet been adopted.

Avinash: Are you telling me that an adulterous woman suffers nothing for her actions ?

Me: The setbacks that she may suffer are with regard to maintenance or alimony or other allied benefits which she would have normally reaped from her marriage had she not indulged in adultery. But she cannot be punished and sent to jail or fined for commission of adultery as is the case with a man.

Me: There's one thing though which I must tell you.

Me: While on the face of it Section 497 may seem biased against men and oblivious of certain truths about women in the changed times, it is not without certain screaming difficulties for women also, especially married women.


Me:  There are a few aspects of the provision against adultery under Section 497 which would appear to be biased against women too.

a) S. 497 elucidates that if the sexual intercourse takes place between a man and married woman

with the consent of the latter's husband then its not adultery. The expression "without the

consent or connivance of that man,..." in Section 497  makes it clear that if the husband of the adulterous

the offence of adultery. But the law does not provide similar authority to wives with regard to sanctioning

extramarital affairs of their husbands.

may have committed adultery. (This is because Section 198 of the Code of Criminal

his absence to prosecute the man committing adultery).

c) It does not cover cases where a married man may commit adultery with an unmarried woman.

The expressions " .....to be wife of another man,..." only covers married women, meaning

thereby that if a married man were to have an affair with an unmarried woman, he shall not be

guilty of adultery. This leaves his wife in a disadvantageous position.


It was on these grounds that Section 497 was challenged in the Supreme Court as being a bad law. (In the case of Sowmithri Vishnu Vs. Union of India & Another (1985) )

Avinash: What did the Court decide ?

Me: Well, the Supreme Court rejected the arguments by observing that it is normally accepted that the man is the seducer and not the woman. However the Court also observed that this position may have undergone a change over the years, but it was for the Parliament to take that into account and modify the law accordingly. And the matter has remained as it was, till date.