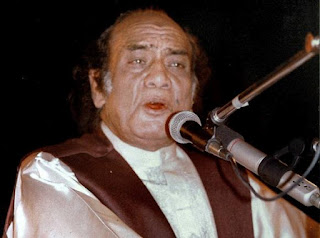 I was introduced to Mehdi Hassan's songs & ghazals as late as in the year 2007. It was a very close friend's father who did me that favour. I remember being captivated by the ace ghazalists voice and songs from the first song I heard. The song was 'Dekh To Dil ke Jaan Se Uthta Hai ...yeh dhuan sa kahaan se uthta hai...". Then I heard his immortal lines in "Ranjish Hi Sahi.." The pathos in his songs were so intense that I couldn't help being mesmerized by it. Later I would end up troubling uncle by asking him to interpret the messages, meanings and motives behind the lines he sang. I still remember when I heard "Khuda Kare ke mohabbat mein yeh muqaam aaye, Kisika nam loon, lab pe tumhara naam aaye.." I felt totally romantic even though I was this guy living in an entirely different generation of music. That's the quintessential legend, the maestro Mehdi Hassan. He doesn't require an endorsement. The man is no more but his songs will transcend time and generations to come.

Mehdi Hassan was born on 18 July 1927 in a village called Luna in Rajasthan, India into a family of traditional musicians. He is supposed to be the 16th generation of hereditary musicians hailing from the Kalawant clan of musicians. Mehdi Hassan had his musical grooming from his father Ustad Azeem Khan and uncle Ustad Ismail Khan who were both traditional Dhrupad singers. Hassan started to perform at a young age and the first concert of dhrupad and kheyal with his elder brother is reported to have been held in FazilkaBungla, near present DC House (1935) of Undivided Punjab. After the Partition of India, 20-year-old Hassan and his family migrated to Pakistan and suffered severe financial hardships.Mehdi initially started working in Chichawatni, in a bicycle shop. He later became a car and diesel tractor mechanic. Despite the financial hardships, his passion for music didn not wither and he kept up the routine of practice on a daily basis. In 1957, Mehdi Hassan was given the opportunity to sing on Radio Pakistan, primarily as a thumri singer, which earned him recognition within the musical fraternity. He had a passion for Urdu poetry, and therefore, he began to experiment by singing ghazals on a part-time basis. He often cited radio officers Z.A. Bukhari and Rafiq Anwar as additional influences in his progression as a ghazal singer. Gradually, he became one of the most popular ghazal singers in Pakistan and the neighbouring India. The rest, as they say, is history.

There never will be another like him. My reverence to the legendary artiste and my sincere condolences to his bereaved family members.