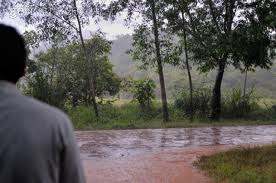 Rajesh arrived at the accorded spot an hour before the decided time. Days of the preceding week had seen the reign of incessant pouring and this Monday was no different. Rajesh closed his umbrella as he walked under the closed restaurant's entrance sheltering himself from the tireless drizzle. The sun remained captive behind the monsoon clouds emitting an occasional halo reminding dependent mortals of its subdued existence. Such unending downpour had cast a gloomy spell on the otherwise bustling streets of Rajesh's hometown. The ambiance had become synonymous to a sorrowful dream where tears and raindrops had blended beyond distinction. What would wake up the dreamer was the only question filling the minds of the fraught seekers of sun's rays. Rajesh kept gazing hopefully at the genesis of the boulevard, filtering out several dissuading figures and shadows that seemed to crave for his attention. His mind was heavy with expectation of one particular face. He kept looking out for that person for timeless eternity and he appeared as if he could melt away bearing that look on his face.


People came and went hurriedly along the lane, now teeming with rain drops. They seemed to run towards an obstinate purpose, which they wouldn't trade, even with the exotic sensation of having million raindrops splash on their faces. To reprieve him from the restiveness, Rajesh's senses drifted along with the trickling water that merrily springed their way to the sewers, though they had been just disowned by the high heavens and banished to a lesser world. He wondered as to how could the water discover pleasure in such banishment. It didn't take him long to fathom that it was their home that the water flowed back so joyously to. The heavens, howsoever exotic they might be, didn't stand a chance against the sewers, for the sewers were where the water are born and groomed through countless conflicts and flows. The ostensible bliss of being in sewers couldn't be replaced by anything at all, not even the much craved heavens. Rajesh drifted again, momentarily, this time to an imminent remembrance of his home that he has now left forever. He had forsaken his home without a second thought, as the first thought was caused by a matter so significantly life altering, that Rajesh believed that there was no alternative to such regretful abandonment. He re assured himself out of the looming guilt for having deserted his loved ones, who had stood with him all these days. He had told himself that had he found any alternative to the present recourse, he would have gladly adopted it, but given the hostile ciscumstances, this path had seemed inevitable. Despite his self lauded logic, he didn't feel completely out of guilt. He knew he never would.


Caught in the storm of regret and guilt, he noticed a lady carrying her son, sheltering him and herself from the rain with an inconveniently held umbrella.  Rajesh saw the boy playfully take his mother's scarf, wipe her face, and bury his tired frame in her comforting hold. As he followed their dwindling figures, the antics of a father son - duo relishing the rains to the core, caught his eyes. The young son paddled the ragged trolley as his drunk father rolled over it & sang aloud some obscure folk song of his far away native land. Neither of them appeared to nurture any intention to shirk away from the blinding downpour. Rajesh couldn't help admiring the duo's blatant embrace of what others were escaping from. His attention floated off to yester - years when his father used to carry him back home from his school as he indulged in innocent fantasies all along the way. He was filled with a sense of powerlessness as he realized that no matter how earnestly he tried, he could never relive those moments. He thought of his mother, who had so diligently taken care of his desires only to be abandoned by him at a time when she must have expected him to respect her senility. He felt melancholy grow within him. The very thought of him having so brutally disregarded his family's wishes for a selfish ambition deeply churned his heart. He thought about it again and again and the more he thought about it, the more he found himself getting sucked into woeful dimensions. A loud crack of lightning followed by a roar of thunder snapped him out of the vicious cycle of regretful musings.


Rajesh shifted back to his present dilemma. He recalled the promise and the accord that had followed. He knew, he had reached early. But then the fixed time had already come and gone. He carefully revisited each words uttered during the making of the pledge. He could not etch out anything abnormal or deviant at that time. Then what must have hindered its fulfillment, he thought restlessly. He was on a leash and his time was limited. After much praying and pleading, he had earned additional limits of his time in this world. That had made him very happy as even the Gods had reiterated the solemness of his emotions. It grew darker as more and more grey clouds rallied together dirtying the vast stretches of the skies. Flashes of lightning and thunderous snarls were becoming more & more frequent indicating the relentless rains still to come. As he shut his eyes in prayer and hope, he felt a warm hand caress his right shoulder.


He turned back and saw the same angel who had acted as the Samaritan to carry his prayers to the Gods for his extended time on earth. A faint smile had titivated her face. She spoke with the mysticism characteristic to the children of the heaven. The dazzle in her eyes was capable of fixating the most nomadic of souls to her instructions. Her feet did not touch the ground indicating her subtle detachment from this world. She soberly informed him that his allotted time was nearing its end and that she has been commanded by her masters to fetch him to their disposal. Rajesh felt tears welling up inside him but he could not find them in his eyes. He sensed a profound misery engulf him but could not speak a word to express himself. The angel was about to utter something in consolation, but before she could mouth anything, Rajesh made his last plea. Leaving this world without meeting, for the last time, his dear beloved Smitha was beyond his tolerance. So he made a request to the angel to take him to Smitha on their way to the heavens. As they levitated, Rajesh wondered pitifully as to what might have caused Smitha to break her promise. Smitha's house wore a deserted appearance. He pulled the angel desperately inside the confines of Smitha's home. He saw their help Shanti, informing somebody over phone to immediately go to the city hospital. Not wasting a second further, the angel along with Rajesh swam swiftly through the dense rain to the precincts of Maheswari Devi Public Hospital. Rajesh didn't require any guidance from the reception counter to find out Smitha. He was a spirit now, salvaged beyond the constraints of humans. In no time he entered the Emergency Ward and embarked near Bed No. 15. Smitha lay there, partially blue, pale and listless. Her loved ones huddled around her as the doctor slipped a tube down her esophagus for pumping out the toxins consumed by her. She moved inadequately, faintly disturbed by the pain of the tube gliding down her delicate body. She appeared no less oblivious to the surroundings as she did to the pain writhing within her.


Time was running out. Rajesh had wanted Smitha to join him in his heavenly abode. That was their last resort when every attempt to convince their relations had failed. They had pleaded with all they could, before each and every far and near relative, relevant - irrelevant, to let them marry each other. But Smitha's extremist family members gave a fig to her pleas. They were not supposed to, in an era where inter caste marriages were dealt with the most severe retribution from the community of men. Overnight they had arranged for her marriage with Pawan Kumar, the son of the wealthy neighborhood merchant Sri Kamal Gupta. The latter had been eyeing since long, to make Smitha her son's bride. So matters were moved with unbelievable velocity and soon the day of her wedding stood only seventy two hours away. Broken in spirit and resolve, the dedicated couple had hopelessly decided to relinquish their wretched lives which now purported to fix a permanent chasm between them. Spending sleepless nights in dejection and self pity, had caused both to forget their existences. They had found the prospect of imminent separation so unbearable that taking away their own lives seemed to be an easier alternative. They had given in. At the exact moment of dawn, over telephone, both professed love, for the last time through their mortal senses and gulped down a handful of  Restoril capsules. They chatted for some time thereafter, inducing strength and offering mutual reassurance. Before slipping into unconsciousness, Smitha promised in a feeble tone that she'll soon be with him, and that their union shall attain freedom from the constricted worldly boundaries. As Rajesh began to fade, he reminded Smitha, that he would wait for her at Gupta Bakery, the lone eatery within the the eastern limits of 12' Esfert Road,  where they had first seen each other, from where they shall embark themselves on their voyage beyond the clouds. Pinned under the dizzying effect of the anti insomnia pills & bereft of residual realism such a proposition had seemed perfectly rational and conceivable to the hapless lovers.The accord had been thus sealed with their last breaths.


Now that Rajesh witnessed Smitha in her present condition, he no more wished for her company. The angel moved closer to Rajesh and whispered "Her time hasn't come". Before Rajesh could fathom the purport of her words, he heard the doctor reassure Smitha's father saying "The worst is over. She'll live." Rajesh shot up an obligatory glance towards the clouds offering his gratitude to the Gods. He knew, this is the last of Smitha, he would see before he was commanded to take up some other life in some alien lap or before he got lucky and was afforded salvation from that cycle. He would be stripped of her memories and the remnants of his nostalgia of a by gone tragedy. Smitha would live though. Maybe she would marry Pawan, or may be good sense will prevail over her creators to allow her healing time. Eventually she will discover bliss in someone else's arms, they way she once did in his. She ought to, for time heals everything. Especially those wounds, to heal which, time has the voluntary aid of her loved ones who didn't want the wound in the first place. Rajesh began to feel a pull, the source of which he could now guess. He quickly rushed over to Smitha and planted an unplantable kiss on her temple. She didn't respond and he didn't turn back, as he was guided out of the wards by the kind angel. As he soared out to the entrance of the hospital, servile to the upward gravity, he saw his still, lifeless body being wheeled towards the post mortem cabin on a stretcher and his father consoling his inconsolable mother.


( "Soulful" is a work of fiction and any resemblance to any person (alive or dead), place or incident is coincidental.)