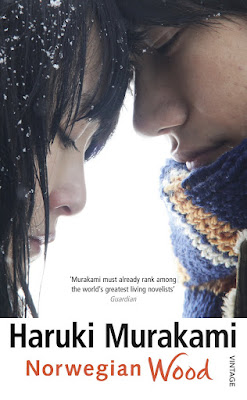 I was introduced to Murakami a little late in my life (about a year ago) by a friend I'd newly made then. When we met, one of the first things she was curious to know about me was the kind of books I’d read. Besides being a published author possessing a gifted grasp over the craft of expression, she was impressively well read. And she immediately got down to making recommendations, all the acclaimed ones, Pullitzer and Booker winners, Costa Books, and a few avante garde works. But to my surprise, shortly after making that list she got up and sauntered to the 'Fiction' corner of the store we were in and bought for me a book she had not mentioned in it, a paperback edition of (Haruki Murakami’s) Norwegian Wood.  I'll come to the reason shortly.

The novel which elevated Murakami to literary pinnacle, revolves around the lives of Toru, Naoko and Midori. Toru’s young life is tangled on one hand by his intense relationship with Naoko who is living far away under institutional therapy and on the other, by his irrefutable chemistry with Midori, a fellow drama classmate. He constantly pines for Naoko who is herself battling depression after her boyfriend Kazuki’s suicide (who was Toru’s best friend as well). At the same time, he finds it almost impossible to evade the influence of his physical proximity with someone as vivacious and assertive as Midori. Though the latter seems to be the connection more likely to see the light of the day, Toru keeps running away to the other, more unpredictable end where Naoko waits for him in permanent melancholy.

The atmosphere for the whole novel is set in the opening scene when the drifting notes of Beatles’ Norwegian Wood falls on Toru’s ear (who is then thirty seven years old) as his flight is about to land in Hamburg, Germany and prompts in him an agonizing recollection of memories from his days as a young student and his love affair with the beautiful but broken Naoko. He recalls walking beside her for the last time in the snow layered forests surrounding the mental institution where she was undergoing intensive therapy. Prompted by an aching fear that they're doomed to part one day, she elicits from him a promise that he’ll never stop loving her regardless. When her fears come true, the resultant misery turns very hard to get over, especially because you desperately look to lay the blame on someone for the mess but you can barely decide who it should be. Not very late in the story, Naoko commits suicide in that frozen landscape, suspending Toru's existence in sort of a half life. He moves ahead but a part of him remains forever relegated to that phase in which he'd spent his days with Naoko. He is given a second chance at love with Midori, a chance which he can neither fully embrace nor ever feel capable to completely let go.

In NW Murakami skillfully takes us on a journey through some of life's deeply dark experiences including the trying realms of love and longing. His characters teach us the disenchanting truth that emotional reliance may not be love, almost preaching against the notion which deceives so many young and old alike. Murakami's characters are often found negotiating with divesting circumstances in the story. And he gives us a memorable insight into their minds and hearts with his engaging narration.   The depiction of longing and physical intimacy is accomplished with delicate restraint, moments about the latter are sometimes cleverly made to suffer from a lack of a staged order, which is expected to exist between characters in love and that quite works in favour of the adolescent tone of the novel.

Apart from the central characters, my heart went out for Hatsumi, the long-suffering girlfriend of Nagasawa (Toru's flamboyant, womanizer buddy). It was unbearably saddening the way Murakami has sketched her life. The following excerpt may suffice to tell you about Hatsumi and the reason why she holds that kind of position in the book.

“Watching her, I could see why Nagasawa had chosen her as his special companion. There were any number of women more beautiful than Hatsumi, and Nagasawa could have made any of them his. But Hatsumi had some quality that could send a tremor through your heart. It was nothing forceful. The power she exerted was a subtle thing, but it called forth deep resonances...what Hatsumi had stirred in me was a part of my very self that had long lain dormant. And when the realization struck me, it aroused such sorrow I almost burst into tears. She had been an absolutely special woman. Someone should have done something—anything—to save her. But neither Nagasawa nor I could have managed that. As so many of those I knew had done, Hatsumi reached a certain stage in her life and decided—almost on the spur of the moment—to end it. Two years after Nagasawa left for Germany, she married, and two years after that she slashed her wrists with a razor blade”

What made the experience of reading about Hatsumi so deep for me was the fact that I knew someone like her in my college days. Someone, I now realize why I never loved yet felt deeply affectionate and protective for.

Understandably, NW opened up for me the captivating art of Japanese writing and made me read and adore 'Kazuo Ishiguro's 'Never Let Me Go' and his Booker winning work 'The Remains of the Day'.

I remember, as my friend had held out the copy of NW at me, she'd said ‘You’ll love this and you won't ever forget reading it.’ I don't know what she saw and felt all of a sudden to have changed her mind and let NW intervene in her own list of recommendations of the Pullitzer and Booker winners. I guess writers always manage to see through, and I think that evening she saw through and understood the story I might have been waiting to read all this time.

I still keep the book by my bed. Memories of many of its haunting passages unpredictably compel me to return to them. Rarely is it so that a book does this kind of a thing to you. Its impact on me has been nothing short of intangibly devastating. One reason for it could be the resemblance which substantial portions of the story bear with how my own life has turned out and the men and women I have come to know over the years. Perhaps that likeness makes NW more than just fiction for me.  Don't be surprised if it becomes the same for you.